Medanta - The Medicity in collaboration with the International Union Against Tuberculosis and Lung Disease and the Central TB Division of the Ministry of Health & Family Welfare, Government of India hosted a day-long conference as a call to action for a TB-free India. The event was attended by representatives of the government, including DDG, CTD (Deputy Director General, Central TB Division), DHS (Director Health Service – TB) Haryana and United States Agency for International Development (USAID), among others. The conference addressed key challenges in the space of TB diagnosis in India and underlined the need to foster corporate commitment to this topical issue, besides enhancing technology for a TB-free India by 2025.

India has a very large population which remains undiagnosed for TB. Fortunately, technology is being harnessed to give accurate screening and diagnosis a big boost. The GeneXpert Edge also known as CB-NAAT, is a portable, easy-to-use system, developed specifically for hard to reach population and to help support point of care diagnosis approach.

On average, symptoms of TB take one-and-a-half months to get diagnosed, mainly because few primary health centres (PHCs) have X-ray machines, and only half the TB cases are detected through the usual sputum test. The other half (patients who go undiagnosed) can infect others and even succumb to the infection. GeneXpert in mobile X-ray vans will provide advanced technical assistance helping realize a major shift in diagnostics towards Mission TB-Free India.

A similar model will be implemented in Ranchi, Jharkhand and will be expanded to other districts progressively.

People usually do not visit a doctor until they are significantly unwell. Since TB patients can remain reasonably functional for several months, it leads to delay in diagnosis.  Under Mission TB-Free Haryana, we have screened over 13,000 patients with chest x-rays and with the introduction of GeneExpert in the pre-existing vans, we hope to increase the accuracy of our diagnostic tools.

There must be enough awareness in the people as most of the TB cases can be cured when the disease is diagnosed early, and appropriate medicines provided. We are reaching out to people most vulnerable to TB especially in the rural areas where there is no accessibility to hospitals for treatment.

TB is a very serious scourge eating at the vitals of India. More than 50% patients with pulmonary TB go undetected in India currently. The rise of drug-resistant strains of TB has worsened the situation. Social stigma, lack of awareness and inadequate medical facilities further aggravate the problem. In continuation of our commitment to public health and more specifically, a TB Free India, we have introduced a unique system, GeneXpert Edge. This adds speed and scale by virtue of being portable and diagnosing the disease accurately and quickly within a day.

After the success of Mission TB-free Haryana, the initiative will expand to other states, starting with TB-free Ranchi in Jharkhand.

Advances in medical science along with other generational growth factors have led to drastic increase in the lifespan of humans and the number of people living (and at older ages) than in the past. While there are several social upsides to having an ageing population, healthcare needs of this vulnerable group pose a great challenge for providers.

This year at the Medanta Heart Institute, over 600 patients over the age of 65 underwent cardiac surgery. The number of such patients has been growing consistently over the years. Considering their tolerance to surgical procedure, surgical therapy is not denied to such patients purely based on their age.

A 98-year-old patient from Iraq, fairly well preserved for his age, was the most recent to undergo CABG at Medanta. The patient presented with Class III Angina. He was a non-smoker, hypertensive, with no family history of coronary artery disease bilateral. He had not undergone any major surgery in the past.

Coronary Angiogram (CAG) revealed triple vessel disease. Despite optimal medical therapy, the patient was experiencing Angina, and angioplasty was not an option.

In view of ostio proximal disease, angiogram surgery was the best option. Pre-operative investigations were essentially normal. CT scan of the chest for assessment of calcification in aortic wall revealed minimal calcification in the ascending aorta. Carotid doppler and peripheral doppler also revealed plaques but were not flow limiting. After intricate evaluation and assessment, the surgery was planned. The patient, who was very determined and motivated, was pre-operatively counselled regarding chest physiotherapy and post-op care.

Induction of anesthesia and vascular access were uneventful. Intra-operatively, sternum was osteoporotic; ascending aorta was healthy. It was, thus, decided to give him vein grafts.

Bilaterally leg veins were of small calibre and were not used. Conduits were harvested from both thighs. Diagonal and LAD were bypassed sequentially, vein grafts were given to obtuse marginal  and posterior descending artery.

Overall, the surgery was uneventful and the patient was shifted to ICU on minimal inotropes. 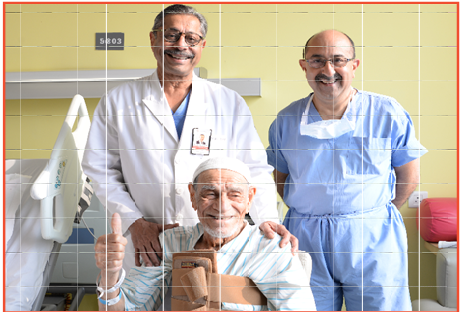 Dr. Naresh Trehan and Dr. Surinder Bazaz with the patient

Medanta has received 1,20,000 USD (INR 90 lakhs) competitive international grant from Pfizer Independent Grants for Learning & Change (IGLC) and The Joint Commission as part of the Antimicrobial Stewardship program for the Asia-Pacific Region.

Medanta was in competition with 12 other hospitals for an innovation focused on accelerating the development and adoption of evidence-based approaches that have the capacity to prevent or contain antimicrobial resistance (AMR), and support and promote appropriate use of antimicrobial agents. The goal of this research is to drive efforts to improve patient outcomes and slow AMR. The Joint Commission convened an expert panel to review and score all the proposal submissions. Medanta was one of the six selected by the panel for grant approval.

On competing with other international JCI accredited hospitals, Dr. Naresh Trehan, Chairman and Managing Director, Medanta said, “In continuation to our commitment to world-class treatment for all our patients, we are delighted to be a part of the Antimicrobial Stewardship Program to excel towards improved patient outcomes.”

Dr. Yatin Mehta, Chairman, Institute of Critical Care and Anaesthesiology, Medanta said, “There is a growing need to find a solution to antimicrobial resistance in a quick turn-around as it is one of the biggest challenges facing today's healthcare providers. We are proud to be a part of this international program and hope to invent best solutions to curb the rise of anti-microbial resistance worldwide.”

In 2019 we are on the cusp of completing ten years of Medanta. We made 2018 an impressive year: we covered substantial ground in medical excellence and accomplished impressive feedback scores. Some of the best regarded names in medicine joined us, we achieved tremendous successes in treating complex diseases and attempted a few successful firsts. In community health, our TB Free Haryana initiative is being replicated in Ranchi, Jharkhand, and will be expanded to other districts progressively. Our research in the area of antibiotic stewardship was acknowledged by global healthcare authorities. We commenced brick and mortar medical facilities at Sri Ganganagar, Rajasthan. Many more locations now have access to Medanta OPDs. Our E Clinic / telemedicine complements these dynamic OPD camps. We launched several operational initiatives which enhanced the Medanta experience for patients. These are just some achievements of 2018. Through 2019, our obsession with quality and service will continue. We will stay committed to ensuring the best in patient care.

As we usher in 2019, I hope the year holds success, fulfilment and good health for you. I look forward to staying connected and, wish you and your family a happy new year.