From Room To Wrist: The Evolution Of The ECG 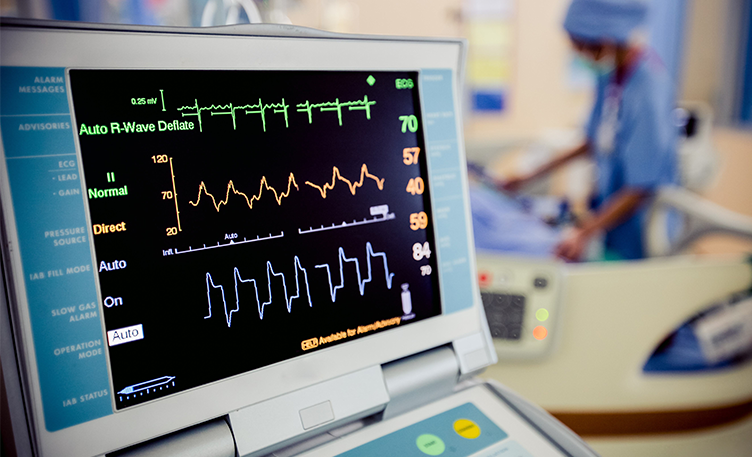 Today, September 29th in addition to being World Heart Day is also the death anniversary of Willem Einthoven.  Dr. Einthoven was a Dutch doctor who is credited with discovering the first practical Electrocardiogram or ECG in 1903 for which he was awarded the Nobel Prize in Medicine in 1924.

Dr. Einthoven drew on earlier work of Italian scientist and physician Dr. Luigi Galvani (after whom the galvanometer is named) who noticed the twitching sensation in a dead frog’s leg when pieces of metal were applied to it.  Dr. Galvani named this phenomenon ‘animal electricity’.  Subsequent work by Alessandor Volta showed that electric currents existed in all living things from worms to humans.

The original galvanometer (invented in 1820) continued to improve and in 1838 Carlo Matteucci, a physics professor in Pisa, Italy, connected a frog’s heart to its leg muscle and noticed that it twitched with each heartbeat which led him to conclude that it was the  heart that was giving out some kind of electrical signal.

In 1887, British physiologist Augustus Waller discovered it was possible to record heart activity from the skin’s surface. He used an instrument called a capillary electrometer to trace heart signals onto photographic plates. 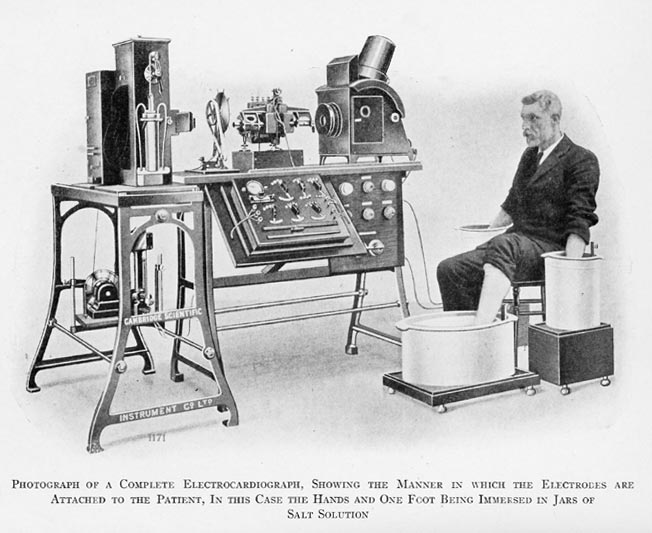 Dr. Einthoven was inspired by Waller’s experiments.  In 1902, he developed an instrument to record traces of the heart’s activity.  The term ‘electrocardiogram’ used to describe these wave forms was first coined by Einthoven in 1893.  Einthoven identified five peaks and troughs, or ‘waves’, in the heart’s electrical activity, which he called P, Q, R, S and T (still used today) – the letters following O, which is the origin, or bottom left corner, of a graph.  The original machine required water to cool the magnates, weighed almost 300 kg and filled up a room.

Subsequent advances resulted in the first portable ECG machine in 1928 which was powered by a vehicle battery and weighed almost 20 kg until the invention of increasingly smaller transistor electronics and more recently microchips allowed for the development of the kind of 12 lead ECG that we are familiar with today. 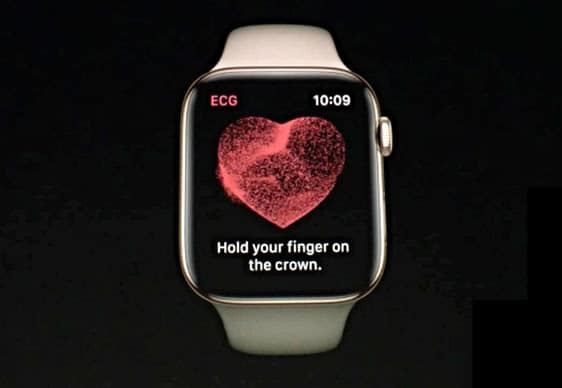 Most recently, Apple unveiled the Apple Watch Series 4, which will have an electrocardiography app which is capable of generating an ECG within 30 seconds, after a user places their finger on the smart watch’s digital crown, which has electrodes built in.  Classified as a Class II device by the FDA it remains to be seen if the Apple Watch will gain acceptance as a serious medical diagnostic device.  There is, however, little doubt that science and the human spirit of discovery have allowed us to move one of the most important aspects of heart disease diagnosis from occupying a full room to little more than a few inches on your wrist.