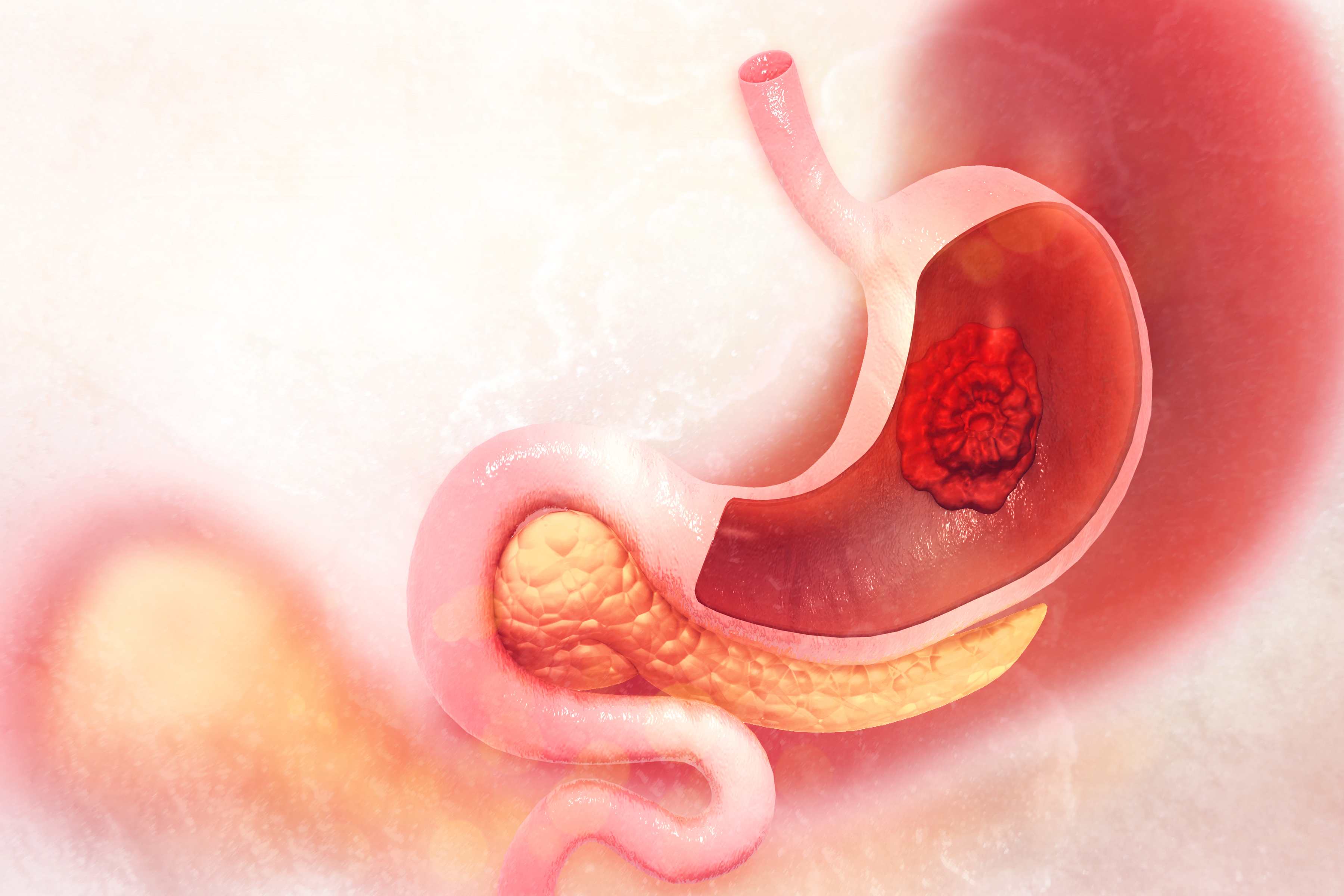 Stomach cancer, also known as gastric cancer, is the sixth most prevalent cancer in the world and the third most common cause of cancer-related deaths worldwide.

What is gastric cancer and how does it begin?

The stomach is the upper food reservoir which receives ingested food from the oesophagus and helps with digestion and absorption of proteins. The cells lining the stomach wall are sensitive to food and environmental changes. There are unknown triggers that changes the normal dynamics of the mucosal lining, which leads to ulcerations or polyp formation often transforms into uncontrolled growth and eventually leads to cancer formation. The stomach cancer may appear as a mass, ulcer, or soft polyp that grows over time and invades nearby structures, causing ominous symptoms.

Although the exact cause of stomach cancer is unknown, there are a few risk factors that have been linked to its development.

What are the symptoms of gastric cancer?

The symptoms of gastric cancer are vague and often remain silent till it reaches an advanced stage.

How is stomach cancer diagnosed?

In addition to a physical examination, the following tests, may be used to identify stomach cancer.

All the above tests intent to provide clinical stage of the disease which helps to individualise best suitable treatment for the patient for best outcome.

How is stomach cancer treated?

Treatment of stomach cancer is multimodal and it combines chemotherapy, radiation, and surgery. Surgery remains the mainstay treatment, and the only curative option and rest are supportive to facilitate a long term cure. The choice of treatment depends on the stage of disease, which is determined by cross sectional investigations as mentioned.

Early superficial malignancies, which account for less than 5% cases in the Indian population, can be treated with endoscopic mucosal excision. Any disease that has spread to other organs such as the liver, lungs, bone etc. is considered systemic and theoretically incurable. They are treated with chemotherapy that can add a few months to natural survival. For the rest of the disease stages, there are potentially curable options like surgery alone or in combination with chemotherapy and radiation. Chemotherapy and radiation have evolved in recent times to be more safe and patient friendly.

Is surgery safe? Will I be able to eat normally after it?

Surgery for gastric cancer is termed "Gastrectomy," which can be partial or total where part of the stomach or the entire stomach is removed depending on the extent of the disease. Surgery was earlier performed using conventional open methods, but recently the use of laparoscopy and robotic surgery has taken a central role with quick recovery, less pain, and better cosmetically with an early return to normal life with comparable cancer outcomes. This is considered a step closer to a patient-friendly treatment approach.

During surgery, the part of the stomach bearing the tumour is removed and food continuity is restored using the proximal small intestine. The oral diet is started on the first day of surgery, and the patient usually returns to a normal diet by the fifth day. The patient may need to stay in the hospital for 7 to 8 days.

What are the post-surgery complications?

Surgery has acceptable safety profile. The incidence of major complications are less than 2%. It may be bleeding, infection, or leakage from the joints, and most of them can be managed without any surgery or intervention. Often, there can be a loss of vitamins and proteins after total gastrectomy, which is treated with oral supplements of vitamin pills and proteins. At after one year of surgery, almost 95% of patients do feel a normal quality of life, resuming their daily activities.

Alcohol, smoking, and tobacco are the main lifestyle hazards that can increase the risk of development of gastric cancer and need to be avoided. There is a 5% chance for these cancers to run in the family. The high-risk individuals are those with gastric cancer diagnosed at a young age (e.g., 40 years or younger), history of gastric cancer or colon cancer in the same family. It is advisable for such families to opt for endoscopic screening after consultation with their doctor. One needs to be vigilant and not to ignore symptoms and should seek early medical help to diagnose this deadly disease on time. Remember, "Early diagnosis and timely treatment are the only hope for survival."