Complex Reconstruction Made Easy with Robot

Vesicovaginal Fistula (VVF) is an abnormal opening between the bladder and the vagina that results in continuous and unremitting urinary incontinence. The issue is one among the most distressing complications of gynecological and obstetric procedures and represents significant morbidity in females. Persistent wetness, odor and discomfort cause serious social problems. The diagnosis of the condition has traditionally been based on clinical methods and cystoscopy. Successful repair of such fistulas requires an accurate diagnostic evaluation and timely repair using procedures that exploit basic surgical principles and the application of interposition flaps.

Treatment of patients with VVF must embrace their immediate and, in most cases, subsequent surgical management. It is also vital to consider the nutritional and rehabilitative needs post-surgery. When a delayed approach to surgery is intended, it is essential to factor in personal hygiene and skin protection.

VVF is one of the common iatrogenic problems and at Medanta - The Medicity, we have modified its repair by robotic assistance wherein we disconnect VVF from the vagina without opening the bladder, which is otherwise a standard approach of treatment. 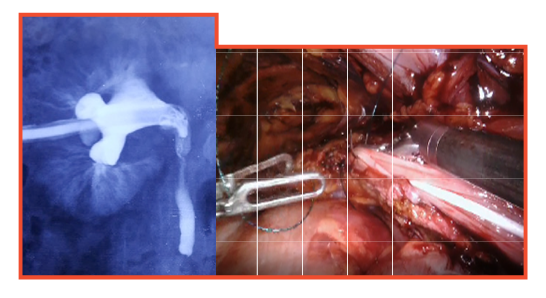 Similarly ureteric replantation and extended Boari's flap repair for loss of a long segment of ureter is performed with the best outcome. 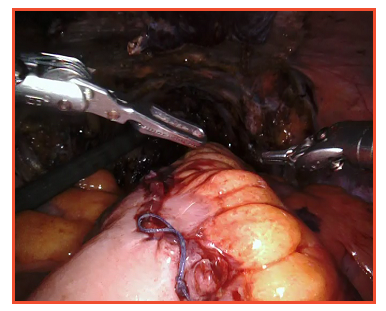 Formation of neobladder with the intestine

In bladder cancer patients where we need to do radical cystectomy, a new bladder formation with the intestine is also accomplished with the help of robotic assistance. 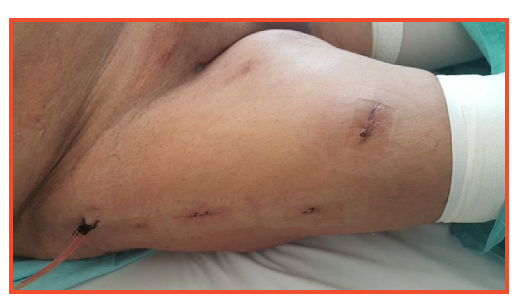 Robot assisted surgery has also been utilized for inguinal lymph node dissection for carcinoma penis and vulva, reducing morbidity of open incision in terms of delayed healing and flap necrosis.

Urethra reconstruction through robot assisted surgery in a young patient After experiencing a long labor, a 26-year-old female had a forceps delivery. In process, there was an injury to the urethra resulting in complete loss of  its length. The bladder neck was opening into the vagina leading to continuous urinary inconti-nence. 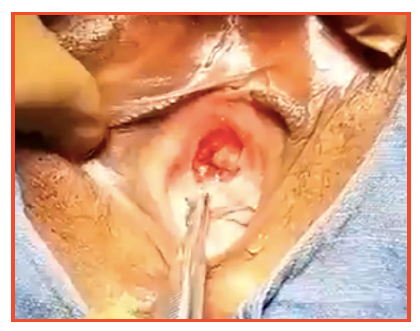 Absence of urethra. Bladder neck opening directly into the vagina

1. New urethra made from the bladder with robotic surgery.

Open surgery would have been very complex in this case, so we decided to do this procedure robotically. Since we had to make a new urethra to connect it to the bladder neck, we separated an anterior part of the bladder and made it into a tube to replace the urethra (Tanagho procedure). To reinforce continence, Burch Colposuspension was done at the same time. Urethral catheter was left for three weeks along with suprapubic catheter.

At six weeks, the patient was voiding on her own but was leaking urine in between. With the help of Kegel's exercise and pelvic floor stimulation, the patient gained back continence along with a good urethra with competent bladder neck.

At five months, the patient has mild stress incontinence which is expected to improve with the help of consistent exercise.

Such robot assisted reconstruction of the urethra has been attempted for the first time ever in the world at Medanta - The Medicity.

Reconstruction of craniofacial deformities has always been a challenge. These deformities may occur secondary to trauma, following neurosurgical intervention like craniotomy or may be congenital in nature. A wide array of procedures and material are recommended for the correction of such deformities. While autologous bone graft continues to be the first choice, it is accompanied by limitations such as donor site morbidity, resorption, limited availability and difficulty to contour and manipulate. Hence various alloplastic materials including Polymethyl Methacrylate (PMMA), Porous Polyethylene (Medpor), Hydroxyapatite and Titanium mesh are being increasingly preferred for reconstruction. Each of these have their own advantages and limitations.

PMMA bone cement is a non-resorbable alloplastic material widely used for reconstruction of cranial defects of all shapes and sizes due its extraordinary moulding property. It is readily available in the operating room and is relatively cheaper.

The biggest challenge of a reconstruction procedure is to make an exact implant. Until recently, customized implants had to be imported at a very heavy cost.  At Medanta - The Medicity, we have overcome this problem by employing 3D printing technology. This has enabled us to produce customized implants at very low cost (approximately 10% of the imported customized implants' cost) to benefit patients with craniofacial deformities. The technique has been successfully deployed with no major complications.

In this process, as a first step, the patient undergoes clinical examination and is  subjected to high resolution CT scans with 0.6-0.7mm cuts. The dicom data obtained is imported into a segmentation software and 3D STL models of the region are created. The normal half is mirrored on to the defect side, and the amount and extent of augmentation is evaluated. Based on this data, an implant is created that simulates the normal side. Next, a mould is created in the software itself and divided into two parts. The mould, implant and the skull model are then 3D printed in-house. Moulds are printed using Thermoplastic Polyurethane (TPU), a soft material from which the implant can be easily removed. In course of the surgery, the defect site is exposed using appropriate incisions. The 3D implant is placed within the defect and its accuracy is checked. Next, PMMA is made into dough in the standard fashion. The inner surface of both parts of the mould is thoroughly lubricated with paraffin or Neosporin ointment. The PMMA dough is placed in the mould and the two parts are fitted together and held in position until the PMMA hardens. The hardened implant is removed from the mould. The patient specific implant is then placed in the defect and checked for proper fit. It is then held in its place with multiple Titanium screws.

A 32-year-old male who had left side facial swelling for one year followed by a spontaneous rupture of overlying skin and foul smelling discharge was referred to us. He had diffused swelling on the left side of face involving malar and maxillary region and there was slight deviation of chin towards the right side.

CT Scan revealed lesion involving half of the upper jaw, the zygomatic bone and part of the orbit.

While planning his virtual surgery, half of his mid face was removed and reconstructed with vascularized bone for future dental rehabilitation and patient specific PMMA implant for the rest of the bony framework.

The surgery was done exactly in line with how it was virtually planned. The patient had an uneventful recovery with no change in his preoperative appearance.

Over 1500 people were served by our doctors and nurses camped at the Arail Ghat.