Doctor’s Day 2020 has arrived amidst an unprecedented and worst pandemic which has gripped the world and has yet shown no sign of abating. Doctors are centre-stage in fighting this invisible enemy and are leading the fight. As doctors sworn to heal and cure, we are committed to playing our role with fortitude, courage and the greatest possible spirit of service to life. We continue to put our lives at stake and many of us and our colleagues in other areas of medicine have even succumbed to the virus. We do what we do, simply because we must do it. The mental gratification of saving lives is what keeps us going. At the same time, we have to be cautious about protecting ourselves and our families. The crises is a phase and shall pass if we battle it out together. Healthcare as a system will recover and emerge stronger. The future of healthcare is bright. Let us collectively take a bow, congratulate ourselves and spur ourselves to rising above the pandemic as we go beyond our call of duty. Happy Doctor’s Day to all my colleagues everywhere.

True essence of multi-specialty care lies in customized multi-disciplinary treatment wherein super specialists collaborate to ensure best possible outcome for each patient. Such team work routinely forms the basis of treatment at Medanta. Here’s one case in which close collaboration among super specialists saved the life of a sexagenarian who was given terminal prognosis.

67-year-old male, hypertensive, was admitted in Allahabad with anterior wall myocardial infarction on April 7, 2018. He was thrombolysed. However, as he was in cardiogenic shock and LVF, he was shifted to a multi-specialty hospital in Lucknow the following day. The patient had left ventricular failure, cardiogenic shock along with acute kidney injury. He also developed urosepsis and was managed medically in the ICU. After 40 days of hospital stay, he had a cardiac arrest. Fortunately he was revived in time. He was taken off the ventilator in three days. However, further treatment was not advised due to comorbidities and anticipated poor outcome. He was discharged on June 6 with terminal prognosis, but was re-admitted two days later with hypotension and reduced urine output. He was found to have cardiogenic shock along with sepsis.

With terminal prognosis, the patient came to Medanta on June 8.  When admitted, the patient was in cardiogenic shock with BP 90mmHg on triple inotropes. The urine output was low (<600ml/24hrs), creatinine was elevated with estimated GFR of 31ml/min. His liver enzymes were elevated (SGOT-2987 U/l, SGPT 1645 U/l), bilirubin level was 2.4mg/dl. He also had sepsis(TLC 18000) due to urinary infection. Echo revealed that he had large anterior infarct with LV ejection fraction of 20% along with severe mitral regurgitation. Cardiogenic shock with multi-organ dysfunction along with sepsis would easily carry a mortality risk in excess of 90%. While the estimated mortality risk was very high, the patient’s positive attitude compelled us to further his treatment. He was in cardiogenic shock and LVF with acute kidney injury, acute liver injury and urosepsis. In view of the multiple comorbidities, the case was jointly evaluated by nephrologists, cardiologists, hepatologists and critical care physicians. It was understood that many of the complications were due to low cardiac output with yet unknown coronary anatomy as well as myocardial viability. With this background, we considered the possibility of increasing the cardiac output and coronary perfusion with a hope to find an opportunity of hemodynamic stabilization, coronary evaluation, and address urosepsis.

The patient was put on intra-aortic balloon counter pulsation with continued inotropic support. All cultures were sent and broad spectrum antibiotics were started to which he responded favorably. The urine output started improving the next day along with sharp fall in creatinine. Inotropes could be tapered off and there was improvement in liver functions.

Fortunately, there were decent targets for revascularization. We did a PET scan for myocardial viability to ascertain the amount of salvageable myocardium.  PET scan result was encouraging as the infarction was limited to 15% around apex and significant (25%) hibernation was noted in mid LAD territory and RCA territory. 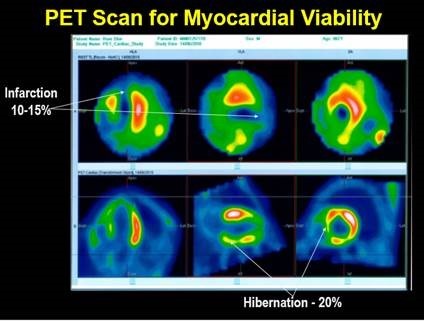 Adrenalin and Dopamine could be stopped in three days. Minimal dose of Noradrenalin had to be continued. Cardiological decision was to perform CABG along with mitral valve repair as soon as sepsis settled. Till such time, IABP support had to be continued. The Infection control team continued to work on the patient regularly, optimizing antibiotics and antifungals as required. Though the counts normalized in five days, the cultures were negative only by the twelfth day.

The patient underwent CABG with MV repair on the fourteenth day with an operative risk of 15%. He was administered four venous grafts (LAD, D1, OM1, PDA) along with mitral valve repair. He tolerated the surgery well, and was extubated on the second day. IABP was removed on fourth day and inotropes were stopped on the fifth day. His renal and liver functions remained stable post-op and he could be discharged on the tenth day following the surgery.

The patient has been on follow up for a year now with no complications.

This case illustrates the capability of a world-class multi super-specialty hospital to provide highest standards of coordinated, multi-disciplinary care that can salvage the most sick patients. On the other hand, it testifies the perseverance physicians should have so that every patient gets the care they deserve.

In our experience, more than 90% patients with coronary artery disease having severe LV dysfunction survive beyond three years after undergoing bypass surgery if they receive optimal multi-disciplinary care.

The exact cause is unknown. Approximately 2 to 5 percent of medulloblastomas occur in association with either the nevoid basal cell carcinoma syndrome (NBCCS), caused by germline mutations in the patched-1 (PTCH1) gene, or familial adenomatous polyposis (FAP), caused by inactivating mutations in the adenomatous polyposis coli (APC) gene. Mutations in these genes predispose to the development of medulloblastoma through defect in pathways important in the pathogenesis of both sporadic and inherited tumors.

What are the common symptoms?

What are the different treatment options?

Combined modality therapy, including surgery, craniospinal radiation therapy and chemotherapy, is the standard of care for both children and adults with medulloblastoma. Following maximum safe resection, the treatment of children with medulloblastoma varies according to the extent of disease and the age at diagnosis:

Average-risk disease: The average-risk sub-set includes children ≥3 years of age who have undergone a complete or near complete resection, have a negative cerebrospinal fluid cytology, and have no evidence of distant metastases. The treatment method for this category is combined modality treatment which includes both craniospinal RT +/- adjuvant combination chemotherapy.

Infants and young children: Children <3 years of age with medulloblastoma need reduced dose of craniospinal radiation for standard risk disease. Chemotherapy may be given to delay radiation, however, incidence of relapse/recurrence increases if radiation is not given.

Adults: Clinical experience with medulloblastoma in adults is limited, and treatment should be patterned on the same lines as in children. In adults with average-risk disease, combined modality treatment including both craniospinal RT and adjuvant combination chemotherapy is offered. The optimal treatment for adults with metastatic, unresectable, or recurrent medulloblastoma is unknown. Treatment includes craniospinal RT followed by combination chemotherapy rather than RT alone in most patients. In cases of recurrent medulloblastoma or patients with high-risk disease, gross residual post-surgery and with spinal metastasis, stem cell transplantation / bone marrow transplantation is recommended.

Are there any side-effects of the treatment?

There are several side effects that may occur when treating medulloblastoma: Posterior fossa syndrome, also called cerebellar mutism, is a major side effect which is characterized by impaired language production, inattention or difficulty initiating movement, cranial nerve palsies or bowel and bladder incontinence. Other side effects include neurocognitive impairment, hearing loss, short stature, endocrine abnormalities (growth hormone deficiency, thyroid deficiency, ACTH deficiency), cataract, cerebrovascular diseases, and even other secondary cancers.

Are people with specific genetic conditions more likely to develop the disease?

Approximately 2 to 5 percent of medulloblastomas occur in association with either the nevoid basal cell carcinoma syndrome (NBCCS), caused by germline mutations in the patched-1 (PTCH1) gene, or familial adenomatous polyposis (FAP), caused by inactivating mutations in the adenomatous polyposis coli (APC) gene. Mutations in these genes predispose to the development of medulloblastoma through defects in pathways important in the pathogenesis of both sporadic and inherited tumors.

What is the latest research on medulloblastoma?

Medanta is one of the few medical institutions in India to provide tertiary medical care on board an aircraft.

With its diverse fleet of aircraft, Medanta Air Ambulance is capable of both domestic and international

Seamless patient transfers. How we do it?

All calls to our air ambulance service number are attended by 24x7 on call doctors experienced in critical care. The doctor on call assesses the patient condition after evaluating case history, medical reports and clinical records.

Based on the assessment of the doctor, the appropriate medical team, equipment and aircraft are dispatched to pick-up the patient from any location, including remote areas with unmanned runways. 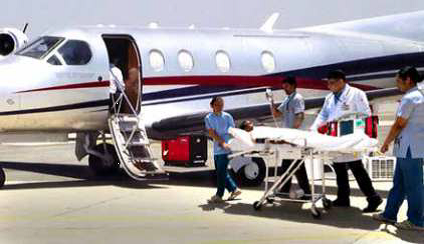 At the Airport, we have the lowest activation time (time from receiving a call to take off) of 90 minutes. We also get priority for take-off and landing, including a green corridor during an emergency.

During flight, we are well-equipped and capable of providing advanced critical care support and can also conduct emergency procedures. There is complete ownership of the treatment provided to the patient by the Medanta Flying Doctors team.

Medanta runs the medical center at Delhi airport and can instantly evacuate the patient directly from aircraft door to Medanta - Gurugram in a seamless manner.

“Emergencies happen without warning and they don’t always happen at places where medical emergency services are accessible. In such conditions, medical air evacuation service acts like a lifesaver by making highly specialized emergency medical care accessible despite geographical challenges.”

Quantities as included in the packages:

As per government guideline, confirmed mild cases of COVID-19 may not require hospital stay if they have the requisite facility of self-isolation at home.