Complete Tracheal Transection is a rare injury, often fatal, because of complete loss of ventilation. However, if a patient’s ventilation into the distal segment can be maintained by bronchoscopic guided cannulation of the distal trachea or some connecting tissue maintaining the continuity, such patients can be saved if they reach hospital alive and an emergency thoracotomy and end-to-end anastomosis of the trachea is done. Successful management requires emergency evacuation of the injured to a trauma care centre for stabilisation (secure Airway, Breathing, Circulation) and a quick, safe and efficient transfer to a centre which has an experienced chest surgery team that can provide definitive surgical management at the earliest.

A 22-year-old boy had an accident and suffered complete tracheal transection with facial, clavicle and bilateral multiple rib fractures. Due to low saturation, he had an emergency intubation. His saturation was still low and a bronchoscopy at the referring hospital revealed complete tracheal transection. Somehow, with intubation his saturation stabilised at 80% and 12 hours after the injury, he was airlifted to the hospital on ventilator with saturation around 80% on FIO2 100.

Bronchoscopy confirmed complete tracheal transection with two ends lying many centimetres apart, but connected by a tissue tunnel which had formed a pseudo-passage through which the ventilation to lungs was maintained.

The patient was immediately operated upon by
Prof. Arvind Kumar and his team. After six hours of a technically demanding surgery, an end-to-end anastomosis of the transected trachea was performed. 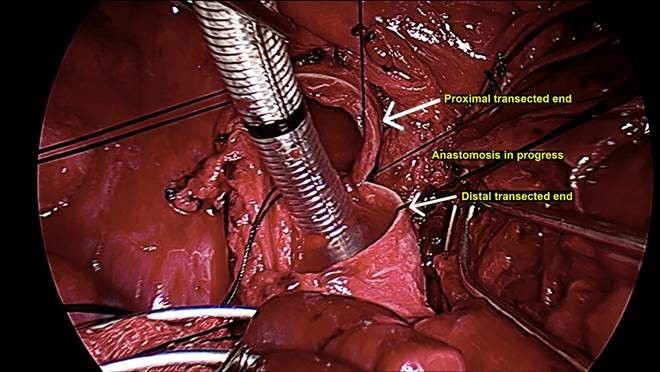 Intra-operative view: During suturing of trachea

The patient also had multiple lacerations and hematoma in the right lung which was managed by repair. He had a slow post-operative recovery due to right lung hematoma and associated severe maxillo-facial injuries. However, he was weaned off the ventilator on the 7th day; shifted out of ICU on the 14th day and discharged on the 28th day after appropriate management of associated injuries. The patient has since returned to normal life.

This rare case exemplifies the successful management of airway trauma surgically, resulting in a successful outcome.

Surgery for Treating Diabetes For Whom and Why

Type 2 diabetes (T2DM) is the most common form of diabetes, accounting for approximately 95% of all cases. Obesity is the primary cause for T2DM and the alarming rise in diabetes prevalence throughout the world has been in direct association with increase in the global obesity rate.

Even individuals with uncontrolled diabetes who undergo bariatric surgery can show drastic improvement in their diabetic state.

A 52-year-old lady came to Medanta - Gurugram for treatment of diabetes and obesity. She weighed 120 Kg with a Body Mass Index (BMI) of 48, and had been recently started on insulin as her blood sugars were not adequately controlled on three oral hypoglycemic agents (HbA1c > 8%). She had a strong family history of diabetes, obesity and diabetes related complications.

The patient desired a long-lasting treatment with potential cure of diabetes and avoidance of insulin. The Endocrinologist referred the patient for a metabolic surgery procedure. She was counselled for bariatric surgery to treat both obesity and diabetes. 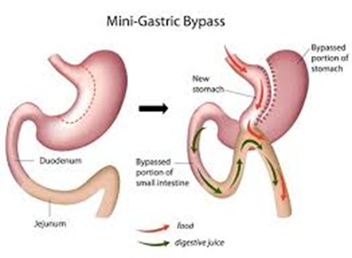 The patient underwent Laparoscopic Mini-Gastric Bypass surgery and made an uneventful recovery. The next day of surgery when she was started on liquid diet, she was immediately euglycemic without any requirement of insulin or any oral hypoglycemic agents. She was discharged the second day after surgery. On her sixth month follow up, she had lost 35 kg and did not require any medication for diabetes with HbA1c of 6%. She was much more active with regular exercise. She was also compliant with multivitamins, and a healthy high protein, low carbohydrate diet.

There are several mechanisms of resolution of diabetes after bariatric surgery depending on which surgery is performed. Surgery for diabetes is particularly helpful in patients whose diabetes is associated with obesity.

The Laparoscopic Mini-Gastric Bypass procedure is being done at select centers in India as both - a procedure for weight reduction and to treat metabolic problems such as diabetes, hypertension. The procedure involves making a gastric sleeve along the lesser curve followed by a malabsorptive procedure done by making a loop gastro-jejunostomy with a long proximal jejunal limb. This procedure offers the advantage that only a single anastomosis is required as compared to the Roux-En-Y Gastric Bypass although there is a 1-2 % risk of bile reflux. The Mini Gastric Bypass is similar to theRoux-En-Y Gastric Bypass in terms of its metabolic profile, and both procedures result in cure of diabetes in about 70% patients. In the rest of patients, even if absolute cure is not achieved, the control becomes much better. Most patients are able to stop insulin and their need for diabetes medication decreases significantly.  This happens immediately after surgery, even before any weight loss is observed. The exact mechanism of this immediate cure of diabetes is still not clear but it has been hypothesized by the Foregut Theory that the food bypassing the duodenum and proximal jejunum results in stimulation of insulin like factors (incretins) such as GLP-1 and GIP.  The anti-incretins in turn decrease, leading to improved hormonal balance with improved glucose regulation in body. Subsequently, over a period of time as patients lose weight, their insulin resistance decreases and their body’s own insulin starts working better as well.

The Laparoscopic Sleeve Gastrectomy procedure has also been found to be very effective in curing diabetes due to several mechanisms. Its metabolic effects such as reduction in Ghrelin level with improved food quality and reduction in food portion size work together to cure diabetes in 50-60% patients.

The beneficial effects of diabetes cure or control are profound. The ill-effects of diabetes on all vital organs are prevented, and several common complications of diabetes such as kidney disease, heart disease, stroke, eye problems are also prevented. The cure of diabetes has been observed to be much better in patients with a shorter duration of diabetes with a relatively better C-peptide level, and patients who are not already on
high doses of insulin.

In Asian patients, bariatric surgery is recommended to patients with BMI > 37, or BMI > 32 with obesity associated co-morbidities such as diabetes, hypertension, sleep apnea. Bariatric surgery has been found to be so effective in curing diabetes that the International Diabetes Federation (IDF) now recommends surgery to be considered in patients with BMI < 32 in whom diabetes cannot be adequately controlled by medication, especially in the presence of other major cardiovascular risk factors.

In conclusion, bariatric surgery can be thought of as an early option to cure diabetes before associated complications set in, more so for younger patients who are both obese and diabetic, or have a strong history of metabolic disorders. 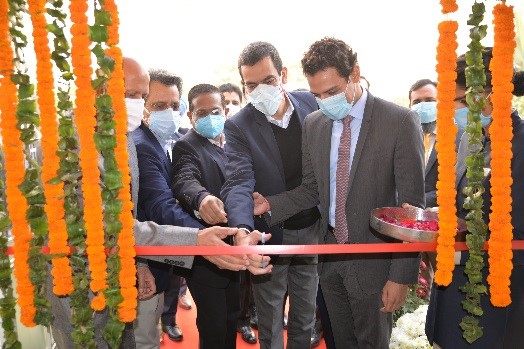 Launching the eClinic, Dr Naresh Trehan said, “Bringing quality healthcare at the doorstep of people amidst the ongoing pandemic is the need of the hour. It has become important to strengthen access to treatment during these unprecedented times to ensure that no one is left untreated. Our flagship eClinic and Nursing Unit initiative is a step towards this commitment.”

''Mr Pankaj Sahni, further added, ‘’Healthcare delivery has changed a lot during the pandemic. People are becoming increasingly comfortable with virtual consultations. The eClinic and Nursing Unit at Central Park will give the residents an opportunity to seek super specialist consultations, chronic care for diseases such as diabetes and hypertension, second opinions and follow-ups without physically visiting the hospital.”

­­­­Dr Bhatta joins Medanta-AyurVAID as Medical Director from Holy Family Hospital, New Delhi where he setup and headed the Ayurveda Department for over 32 years. Dr Bhatta has completed M.D (Ayurveda) from Gujrat Ayurveda University as a gold medallist. With an immense passion for the science of Ayurveda and a high level expertise and experience in Kayachikistsa and Panchakarma, he has treated numerous patients including many well-known dignitaries in India and abroad. At Medanta-AyurVAID, he envisions to serve and treat patients with a holistic approach to improve their quality of life.