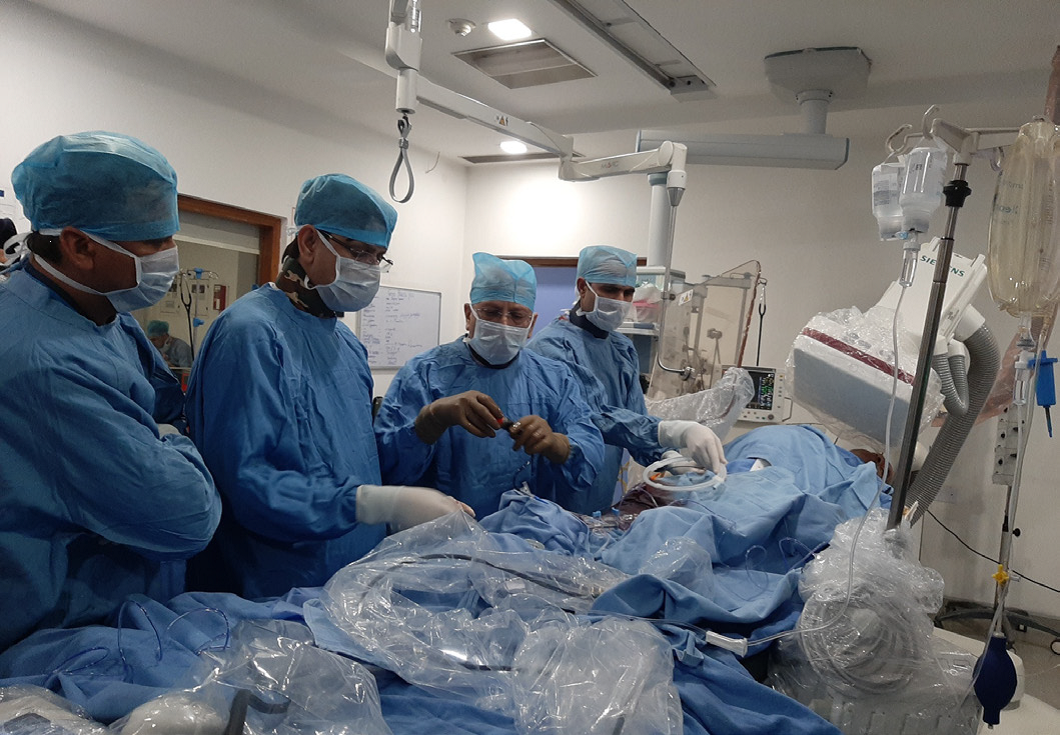 Shockwave Coronary Lithotripsy is a novel procedure which brings hope to those suffering from an advanced form of coronary artery disease (CAD) having angina or heart attack in which the blockage becomes very hard due to deposit of calcium. This happens in 20-25% patients undergoing angioplasty and stenting especially those who are old, diabetic, have chronic kidney disease, long-standing blockages or have undergone previous bypass surgery. Shockwave Coronary Lithotripsy is a major advancement over previous techniques such as ultra-high pressure balloons or rotatory drills which are difficult to use and carry risk of vessel injury and perforations.

Intravascular Lithotripsy is a technology that generates sonic pressure waves within heart arteries to break up problematic calcium deposited blockages so that the blocked artery can be opened with ease and safety, and blood flow can be restored with the placement of a stent. Leveraging the same minimally invasive approach that has been used to treat kidney stones, this technology shall make complex cardiac procedures safer and time-saving.

Doing a kidney transplant for the third time in a patient with two earlier graft failures is a challenge not many healthcare setups are equipped to deal with. Under the leadership of Dr Rajesh Ahlawat and Dr Vijay Kher, the kidney transplant team has done three such cases at Medanta – Gurugram.

Third transplant is both a technical as well as medical challenge. Technically, with the patient having four kidneys in the body (two native ones and two transplanted ones), the challenge is to find suitable place inside the abdomen to place the new graft. Moreover, the graft needs to be fixed to prevent it from moving and undergoing torsion which could potentially jeopardize its survival. Medically, owing to the two earlier transplants, the challenge is that there are already pre-formed antibodies in the recipient, which can attack the new kidney and increase the chances of rejection.

Pre-transplant medical evaluation of such patients must include a detailed immunological testing to rule out the presence of such antibodies against the donor kidney. If such an antibody is present, it may need removal by a process known as plasmapheresis and necessitate special medications to suppress the immune response so that the transplanted kidney gets accepted well by the recipient’s body. These patients also have higher chances of infections, as they need extra immunosuppressive drugs compared to first time transplant recipients. One needs to strike a balance between all these aspects while managing a third transplant recipient.

A 38-year-old female patient was referred to
Medanta – Gurugram owing to two failed kidney transplants. She was diagnosed with kidney failure at 24 years of age for which she underwent the first kidney transplant in 2006 with her mother as the donor. In some time, she got married and also delivered a baby safely. Four years following the first transplant, the graft failed due to chronic rejection. She was again put on hemodialysis. This time, her maternal aunt donated one of her kidneys to save the patient’s life. The second transplant happened in 2012. This time, the graft lasted 6.5 years and she was back on dialysis in June 2019.

With two failed grafts, the patient had lost all hope. This time, while her maternal uncle came forth to donate a kidney, the challenge was to find a setup which had the capability to deal with such a complex case. After being turned down by several hospitals, she came to
Medanta - Gurugram.

After thorough evaluation and meticulous planning, the transplant was done in January 2020. The first challenge was to mitigate the risk of rejection. Pre-transplant flow cytometry crossmatch was weak B positive but no donor specific antibodies were found. The second challenge was to find a suitable site to place the new kidney. Usually when one graft kidney has already been placed on either side, there is very little space to accommodate the new kidney. Common practice is to place it inside the peritoneal cavity where it is in contact with the intestines. This increases

the risk of torsion if it is not fixed. For our patient, we did a pre-operative abdominal CT scan, which revealed that the old right graft kidney was smaller in size. This meant that we could find some space above it. The new kidney was thus placed retropertoneally away from the intestine and attached to the blood vessels at a higher level. 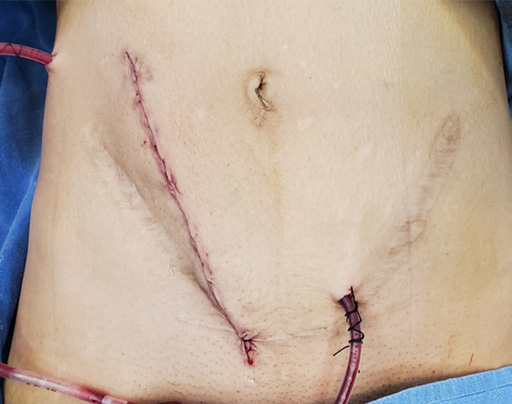 Compared to her prior two transplants in which she experienced a lot of pain and discomfort lasting for weeks, this surgery was smoother and pain free. Recovery was also quicker. Her creatinine became normal on the second post-operative day. She was discharged within one week with a creatinine level of 0.7 mg/dl. Her DJ stent was removed at three weeks and her graft function has been stable throughout her follow up.

Deep vein thrombosis, or DVT, is a blood clot that forms in a vein deep in the body. Most deep vein clots occur in the lower leg or thigh. If the vein swells, the condition is called thrombophlebitis. A deep vein thrombosis can break loose and cause a serious problem in the lung, called
pulmonary embolism.

A pulmonary embolism is the most serious complication of DVT. It happens when a piece of blood clot (DVT) breaks off and travels through the bloodstream to the lungs, where it blocks one of the blood vessels. In severe cases this can be fatal. If the clot is small, it might not cause any symptoms.

Symptoms of DVT only occur in about 50% people who have this condition. Common symptoms include: swelling in foot, ankle, or leg, usually on one side, cramping pain in the affected leg that usually begins in the calf.

May-Thurner Syndrome (MTS) is caused when the left iliac vein is compressed by the right iliac artery, which increases the risk of DVT in the left extremity. DVT is a blood clot that may partially or completely block blood flow through the vein.

36-year-old male presented with complaints of acute swelling in the left leg for 2-3 days. Patient also gave history of calf vein thrombosis five years ago which was treated conservatively with anticoagulation.

Barring a history of regular, prolonged car journeys at frequent intervals, there was no significant positive history of any other medical illness.

In case of young adults with acute DVT which clinically seems to be unprovoked, one should definitely suspect

Unless there is any contraindication, all young adults with acute Ileo femoral DVT should be subjected to catheter directed thrombosis along with mechanical thrombectomy.

In line with our protocol, along with all routine blood investigations, we carry out CT pulmonary angio with DVT protocol for all patients. This gives us complete detail and extension of the thrombus along with the status of pulmonary vasculature. Homocysteine, especially in vegetarians, should also be done. In this particular case, homocysteine was very high.

IVC filter is placed for all patients before Mechanical Thrombectomy if there is significant venous thromboembolism. However, all IVC filters should be temporary filters and should be removed within 3-4 months. The usually preferred site to introduce the multi-hole infusion catheter is either the post tibial or the popliteal vein. All accesses are obtained under duplex and fluoroscopic guidance to prevent any inadvertent injury to adjacent arteries.

At Medanta, TPA (Actilyse) is the routine agent used for catheter-directed thrombolysis. Angiojet and Penumbra are the two devices we use for mechanical thrombectomy.

Post CDT and mechanical thrombectomy, if a stenotic lesion is identified at the iliac confluence, a balloon plasty is done. In case there is significant recoil or evidence of May-Thurner Syndrome, the Sinus Obliquus stent, a stent specifically used for such lesions, is placed.

Our patient underwent CDT via left popliteal vein with 50 cm long multi-hole catheter along with mechanical thrombectomy with angiojet. Post lysis, there was a residual stenotic lesion with chronic thrombus. An Obliquus stent (16mm X 100mm) was placed. Post stent deployment, there was complete opacification of the Iliac vein with no filling defects. Literature suggests that if these iliac lesions are left untreated, there is a very high chance of recurrent DVT. 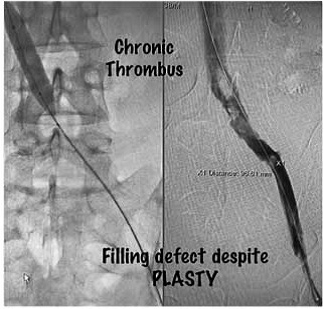 Post procedure, the patient was made ambulatory within 24 hours. Clinically there was no residual swelling or discomfort.

Combining mechanical thrombectomy with CDT offers a major advantage over the conventional anticoagulation. Most patients who are subjected to anticoagulation alone end up developing post-thrombotic limb which has a high morbidity probability.

Our patient was discharged on the fourth post-op day on long term new generation oral anticoagulant - Rivoraxaban, along with elastic graduated stockings.

Sinus-Obliquus has been specifically designed for treating venous obstructions close to the bifurcation of the inferior vena cava. Its exceptional oblique design offers the possibility of placing the stent directly at the bifurcation without jailing the flow of contralateral Iliac vein – optimized requirement for the treatment of May-Thurner Syndrome. Medanta has the largest series of placing these Obliquus stents in India.

In continuation of its commitment to make India TB free, Mission TB free Haryana, a flagship initiative of Medanta, in collaboration with the International Union Against Tuberculosis and Lung Disease, Central TB Division of the Ministry of Health & Family Welfare, Government of India and the Government of Haryana recently launched TB Free Block Pataudi to improve the diagnosis and treatment of tuberculosis in the district.

TB Free Block Pataudi aims to screen a population of 6 lakh across 142 villages in the Pataudi block over the next two years. Volunteers from Medanta along with ASHAs, the grassroots health workers in villages will conduct door-to-door screenings for detecting people who are at potential risk. The ones who screen positive for cough will be invited to attend a camp with X-ray, sputum and geneXpert facilities available at point of care in a mobile van. The diagnosis will be confirmed on the same day and the results will be available on a unique mobile application which has been developed in-house by Medanta.

Dr Naresh Trehan, Chairman & Managing Director, Medanta said, “Every year, India witnesses over 8,50,000 cases of TB that go undiagnosed and untreated and it is a serious challenge that has been plaguing the nation. Screening and detection play a crucial role in the prevention and management of the disease as currently a vast majority of patients go undetected in India, thereby increasing the disease burden significantly. The private healthcare sector can play an important role in the prevention and treatment of TB by taking on a larger role in the eradication of the disease’’. 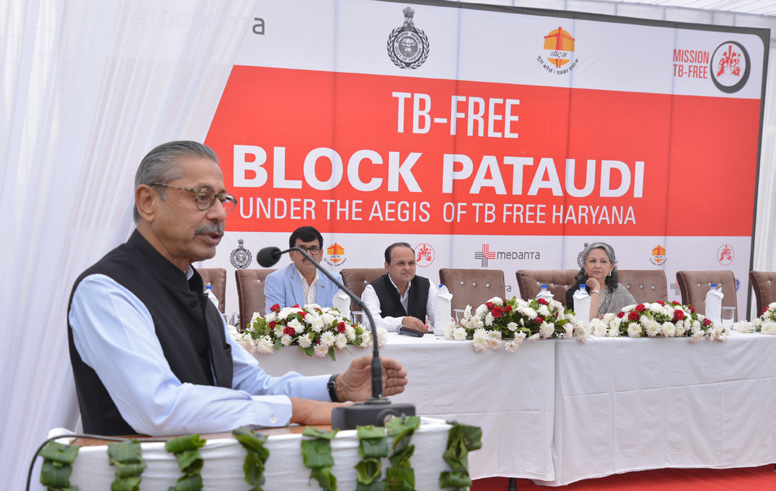 TB Free Block Pataudi is a collaborative effort and a step forward to making Haryana TB free. As part of the mission, 25,000 individuals have been screened over the last six years, and 2,870 have been initiated on the DOTS therapy.