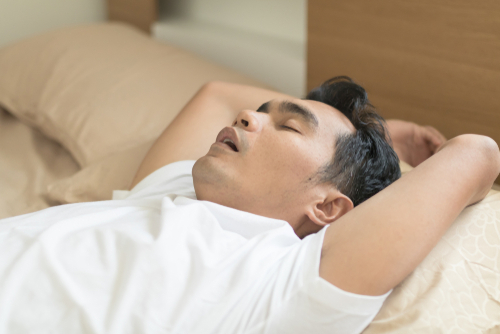 When peaceful sleep at night is suddenly disturbed by a feeling of being choked or breathless, and if this happens quite regularly, then it is a good idea to see a doctor at the earliest. These are classic signs of a condition called Obstructive Sleep Apnea (OSA), a sleep disorder. In this condition, a person stops breathing several times at night while sleeping; the throat muscles relax for too long, fully or partially blocking the upper airways.Obstructive sleep apnea, typically characterised by loud snoring is considered a serious condition, because doctors say a person may experience as many as 100 episodes an hour where breathing repeatedly stops and then restarts. This erratic breathing has a cyclical effect on the body, much of which is harmful.

When a person breathes while sleeping, air is supposed to flow uninterrupted through their mouth and nose and go to the lungs. But when a person with OSA sleeps, their throat muscles relax and the tongue falls back, closing the airways. As a result, very little or no air reaches the lungs. When the brain senses that there is a drop in the oxygen supply levels and an increase in the carbon dioxide levels, it immediately gets active. This results in the throat muscles and tongue going back to their normal position which restores breathing. When a person wakes up suddenly due to obstructions in breathing, they usually wake with a gasp, choke or with a snort. All these mostly occur at a subconscious level and a person may not be aware of this at all.

The commonest signs of OSA are

Snoring is often caused by tiredness, common cold and drinking alcohol occasionally and is not necessarily a sleep apnea. So while not all snoring is considered serious, it should be reported to a doctor if a person snores regularly.

According to doctors, OSA should not be ignored as there are various complications that could arise.

Not diagnosing and treating OSA can be fatal.

“There have been many accidents because the person who caused the accident suffers from sleep apnea but wasn’t aware of it. Sometimes when a patient is driving, he can fall asleep at the wheel and crash. So, he can hurt himself and others as well,” warns Dr Bornali Datta, Associate Director, Respiratory and Sleep Medicine at Medanta- The Medicity.

At Medanta, to detect and treat sleep apnea, a sleep study is undertaken by the doctors in a specially designed sleep lab. A sleep study records the sleeping pattern of the patient that helps to understand the severity of the apnea. In the first half of the night, a diagnosis is made based on the sleeping and breathing patterns. After the diagnosis, the second half of the night is dedicated to treatment using a CPAP (Continuous Positive Airway Pressure) or BiPAP (Bilevel Positive Airway Pressure) machine, which helps the patient to breathe by delivering mild air pressure that keeps their airways open. The doctor then goes through the lab reports generated during the sleep study for further evaluation and treatment.

“Consulting a Respiratory and Sleep Medicine doctor is very important for the treatment of OSA. The good news is that more people are coming forward to get treated,” adds Dr Datta.

One can substantially manage OSA with treatment and by making certain lifestyle changes like exercising, losing excess weight, eating balanced meals and avoiding smoking and drinking.