Diabetes mellitus or diabetes is a chronic condition that affects the body’s ability to utilise sugars and fats. There are three major types of diabetes: Type 1 diabetes, Type 2 diabetes, and Gestational diabetes.

All three forms of diabetes have a common element i.e. the production or utilisation of insulin. Normally, the body breaks down the sugars and carbohydrates that are consumed and converts them into glucose. But for the conversion of glucose to energy, the body needs insulin. With any type of diabetes, the body either doesn’t make enough insulin, can’t utilize the insulin it produces or it could be a combination of both.

When the glucose is not utilized, it builds up in the blood giving rise to high levels of blood glucose. This can damage the smaller blood vessels circulating blood to the kidneys, heart, eyes, and the nervous system. If left untreated, diabetes can eventually cause heart disease, stroke, kidney disease, blindness and nerve damage.

Type 1 diabetes is insulin-dependent. It is called juvenile-onset diabetes because it often begins in childhood. When diagnosed in children, it can be overwhelming. The parent along with the child will need to learn how to manage medications, keep track of carbohydrate intake and monitor blood sugar levels.

Type 1 diabetes is an autoimmune disease that is caused when the body starts attacking its own pancreas with antibodies. In people who have type 1 diabetes, the damaged pancreas stops producing insulin.

Risk factors for this type of diabetes could be a genetic disposition or the result of faulty beta cells in the pancreas that are responsible for insulin production.

The treatment for Type 1 diabetes involves taking insulin, usually by injecting it into the fatty tissue below the skin.

Adults and children with type 1 diabetes can lead long, active lives if they carefully monitor their glucose, make the needed lifestyle changes, and adhere to the treatment plan charted out by their doctor.

Here’s the story of Deevyakshi Karajgi, who at the age of 13 years was diagnosed with juvenile diabetes. With the support of her parents, the team of Paediatric Endocrinologists at Medanta and with her own willpower, Deevyakshi has managed to control her diabetes by changing her lifestyle and incorporating discipline in her life.

Type 2 diabetes is the most common type of diabetes and affects around 95% of adult diabetics. For this reason, it is also known as adult-onset diabetes but due to the epidemic of obesity, more overweight kids and teenagers are also developing type 2 diabetes.

Even though it is a milder form of diabetes, it can still cause major health complications, particularly in the smallest blood vessels in the body that nourish the kidneys, eyes, and nerves. Like type 1 diabetes, type 2 also increases your risk of heart disease and stroke.

With type 2 diabetes, the pancreas produces some insulin. But the amount that is produced is either not enough to reach the body’s requirements or the cells in the body are resistant to it. This insulin resistance or lack of sensitivity happens primarily in the fatty tissue, liver or muscle cells.

People who are obese are more likely to develop type 2 diabetes and also are at a higher risk of insulin resistance. Because the cells are not sensitive to insulin, this results in the pancreas working overtime to produce even more insulin, which is still not enough to keep the sugar levels in check.

Although there is no cure for diabetes, type 2 diabetes can be effectively controlled with weight management, nutrition, and exercise. This, however, has only proven effective during the onset of diabetes and as type 2 diabetes tends to progress, medications are often needed to further manage the condition.

Pregnancy to some degree leads to insulin resistance, which triggers what is known as gestational diabetes. It is often diagnosed during middle or late pregnancy. The high blood sugar levels in the mother are circulated through the placenta to the baby, putting the growth and development of the fetus at risk.

Gestational diabetes affects 2% to 10% of pregnancies. It usually resolves itself after pregnancy but it does put the mothers at risk of developing type 2 diabetes later in life. The risks to the unborn baby are even greater than the risks to the mother and could include abnormal weight gain before birth, breathing problems, and higher obesity and diabetes risk later in life. Risks to the mother include undergoing a cesarean section due to the overly large baby, as well as damage to the heart, kidney, nerves, and eyes.

To control the effects of gestational diabetes, working closely with your healthcare team becomes important. Here are a few things to keep in mind:

Other Forms of Diabetes

Sometimes diabetes can be caused as a result of specific conditions. For example, complications of the pancreas, certain medications, and surgeries, or infections can also cause diabetes. These cases, however only account for 1% to 5% of all diabetes cases. 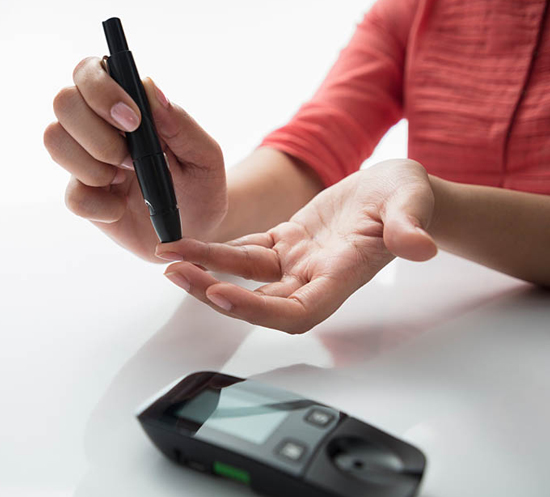