THE EXCHANGE | Newsletter May 2019

Congenital Aortic Stenosis (Fig 1) is a relatively common type of congenital heart disease with an estimated worldwide incidence of 0.22 per 1000 live births. The management of this defect is initially done by Balloon Aortic Valvuloplasty (BAV) and Surgical Valvotomy (Fig 2 and 3). These procedures are considered to be the initial treatment of choice for this defect. However, these procedures are only palliative and over time these children require some form of definitive therapy for the dysplastic valve in the form of replacement. 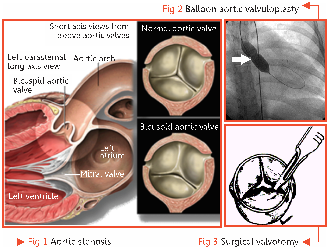 The need for definitive therapy for critical aortic stenosis in neonates and children is marred by a host of problems. The first is non-availability of appropriately sized valve for this subset of patients. The second problem is compliance to life-long anticoagulation therapy which is very difficult to maintain in this subset. In view of these challenges, it was hypothesized by Dr Donald Ross, a South African Cardiothoracic surgeon, in the year 1962, that replacement of the aortic valve with a pulmonary autograft (patient's own valve) and placement of a homograft in place of the patient's pulmonary valve could solve this problem. The assumed benefit of this procedure was that the autograft would grow over time and hence the therapy would literally be a cure for the disease. The first Ross procedure (Fig 5) was performed in 1967 at the Guy's Hospital, London (Donald Rosset al;Lancet Vol 290,Issue 7523Nov 4,1967 Pg 956-958.)

Why put the patient's pulmonary valve at the aortic position?

Placement of the patient's pulmonary valve at the aortic position offers several advantages.

An autograft is superior to allograft in terms of clinical and hemodynamic outcomes.

The former offers superior immediate hemodynamics even in small sizes and hence it can also be applied to neonates. Also, it rules out the need for anticoagulation. Other benefits include resistance to infection, suitability for use despite congenital and acquired distortion of the cardiac anatomy, and better hemodynamics over time as the growth of the autograft is well described.

Ross procedure, though a seemingly superior alternative, cannot be used in all patient subsets. It has its own indications which include:

The procedure is contraindicated in the following conditions:

These options have evolved over time. In the beginning when Dr Donald Ross had started the procedure, he used a totally autologous technique in which he employed the patient's tensor fascia lata and pericardium to create the valve and conduit. Later, some researchers started using a xenograft mounted on a Dacron tube (Fig 6). Others still used aortic homograft (Fig. 7). Mayo Clinic in 1983 first deployed the use of pulmonary valve homograft as it provided better longevity (Fig 8). In the present day scenario, pulmonary valve homograft is the homograft of choice. 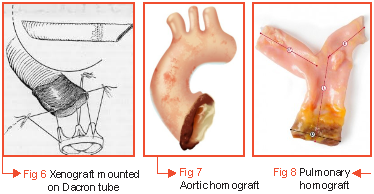 Of these, the root replacement technique is most recommended. 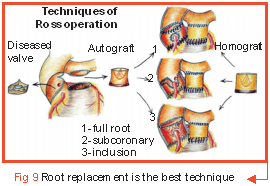 A two-month-old female infant weighing 4.8kg, who was a known case of Bicuspid Aortic Valve with Severe Aortic Stenosis had undergone BAV at one month of age. The patient reported at the emergency of Medanta - The Medicity on January 9, 2017 with complaints of reduced feed intake and urine output for one day and fast breathing for two days. In view of her condition, she was shifted to the cardiac ICU for stabilisation with inotropes, decongestant medications, oxygen by hood and IV fluids. Echo was done which revealed recurrence of obstruction across the aortic valve with an aortic valve peak/mean gradient of 54/31mmHg. There was Grade II Aortic Regurgitation and her heart function was reduced to 20% (Fig 10). In view of Aortic Regurgitation, repeating BAV was anticipated to increase the risk further. In this scenario, Ross procedure was offered as an alternative (Fig 11). Pulmonary autograft was put at the aortic position and porcine root was placed at the pulmonary position.

The patient had a smooth recovery post-surgery and was discharged in stable condition after seven days of hospitalization. Her heart function had improved to 35-40% which normalized after one year of surgery.

26 cases of Ross procedure have been conducted at Medanta - The Medicity. All cases on follow-up have been fine with 19% requiring intervention for pulmonary homograft replacement. There was no instance of pulmonary autograft replacement and no post-surgical mortality.

In a large meta-analysis published in the Circulation Journal in December 2018 in which 13,209 patients were reviewed over a time period of eight years, it was found that the lifetime risk for pulmonary autograft and homograft intervention in children was 94% and 100% respectively and the similar risk for adults at 45 years of age was 45% and 19% respectively. It was hence concluded that Ross procedure can be considered a treatment of choice in infants and children with severe aortic stenosis with good hemodynamic results. Almost all children require some form of intervention during their lifetime.

Vocal Cord Cancer - Treating the Cancer while Saving the Voice

Carcinoma Glottis (vocal cord cancer) is one of the most common cancers that affect men in India. People who smoke are predisposed to it. The earliest symptom is hoarseness, which is persistent and often progressive. As the cancer spreads to adjacent areas, other symptoms may develop such as pain in the throat, odynophagia, referred pain in the ear and breathing difficulty or stridor. Nodal metastasis is uncommon in early stage vocal cord cancer and develops later as the primary tumor grows.

The management of Carcinoma Glottis is truly multimodal wherein surgery, radiation and chemotherapy are all leveraged in the most efficient manner possible. The objective of the treatment is to cure the cancer while preserving a serviceable voice for the patient.

For very early (T1 and select T2) lesions, endoscopic laser resection is the treatment of choice. Medanta – The Medicity is one of the few facilities where the expertise exists. It involves the use of a rigid endoscope to expose the tumour on the vocal cord which is then resected using a CO2 laser. The resection is done under microscopic vision and is very precise. As no collateral damage is present in the surrounding structures, the patient returns to normal activities and diet the following day. The procedure is done under general anaesthesia and needs overnight admission. The voice is initially hoarse and recovers to reasonable levels over six weeks. The final voice quality is similar to that obtained by radiation, which is the alternative method to treat these early tumors. 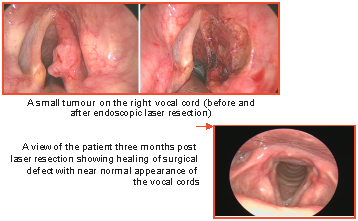 For intermediate sized cancers (T3) in patients who have a functional larynx, the standard of care is organ-preservation treatment using concomitant chemotherapy and radiotherapy. The treatment course lasts seven weeks and major complications relate to dysphagia, both in the short and long-term.

For large cancers (T4), the best curative modality is total laryngectomy. This involves the removal of the entire larynx, leaving the patient with permanent aphonia or loss of voice. This has notable negative physical, social, psychological impact on the patient. At Medanta - The Medicity, we restore high quality voice in such patients by doing a trachea-esophageal puncture (TEP) and placing a speaking valve.

A puncture is created between the posterior wall of the trachea and anterior wall of the esophagus (a deliberate iatrogenic trachea-esophageal fistula). A one-way valve is placed in this puncture site, which allows air to pass from the trachea to the esophagus but prevents food and liquid from passing back in the reverse direction. The patient uses this valve to direct tracheal air into the esophagus and produce a voice similar in quality to someone with a sore throat. TEP allows most patients to resume a normal social life and professional pursuits. 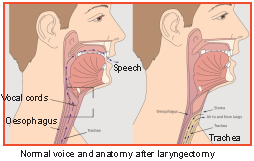 Use of tracheoesophageal puncture for speech production after total laryngectomy

58-year-old male patient was diagnosed with a cancer of his larynx. A senior professional of international repute, the patient needed a laryngectomy to treat the cancer. This meant complete loss of voice and a significantly compromised personal and professional post-surgery life.

Since the patient was young, we were keen on restoring his voice to a level that would allow him to remain professionally active. The patient underwent a TEP in the year 2012 to restore his voice the same time as we did the laryngectomy.

Two weeks following the surgery, the patient was able to speak again. His life returned to normal, and he resumed his job. Few days following the surgery, he shared with us a video of him addressing an international conference in his TEP restored voice. He clearly stands out as an inspiration to patients who need to undergo laryngectomy, but fear the loss of natural voice.