Distal one third femur fractures comprise of 6 % of all fractures and 50 % of these are suffered by the geriatric age group with a mortality rate of 22% at one year. Traditionally these fractures were treated by conservative methods, but problems like stiff knee, decubitus ulcers, pulmonary complications and deep vein thrombosis complicated the course of treatment. With the advent of modern surgical techniques, these fractures are now managed by either plating (single or dual) or intra-medullary nailing, depending upon the fracture configuration. This offers the advantage of restoring articular congruity and maintaining stable anatomical alignment and enabling early range of motion to ward off the complications of conservative management and recumbency. In geriatric population, however, the surgical outcome can get complicated by poor implant anchorage, implant failure and non-union due to osteoporotic bone stock. Non-union of the fracture is also at risk leading to increased morbidity and repeat surgery. These fractures even when fixed can get complicated by arthritis as these are intra-articular injuries and insult to cartilage is almost the rule. Being frail, the elderly find it challenging to ambulate even non weight bearing.

In the geriatric population, not only the fracture configuration and bone stock determine the course of
treatment, but also concomitant knee osteoarthritis, which may lead to patient dissatisfaction despite the fracture unting uneventfully. In such kind of a situation, total knee arthroplasty is the best option. It preserves mobility and eliminates the risk of non-union. It allows for immediate weight bearing which restores function and maximizes quality of life. The risk of a fracture leading to arthritis of the joint necessitating a second surgery to replace the joint is also eliminated.

We herein report the case of a 72-year-old, diabetic and hypertensive female patient who presented to the
emergency department with a history of fall at home. She complained of pain in lower thigh and inability to bear weight after the fall. Her X-rays revealed fracture of the lower end of femur and advanced pre-existing osteoarthritis of the knees. After initial assessment and emergency supportive care, she was referred to the Medanta Institute of Musculoskeletal Disorders and Orthopaedics.

Surgical options were discussed in detail with the family. They were explained the pros and cons of operative fracture fixation vs arthroplasty. Taking into consideration her age, osteoporosis and pre-existing advanced knee arthritis, a consensual decision for primary constrained total knee arthroplasty was arrived at. A constrained knee design involves an intra-medullary stem extension which not only stabilizes the fracture, but also takes care of the collateral ligament injury which commonly complicates these fractures with intra-articular pattern.

The patient was operated on second day of admission and mobilised in the evening on the same day with the aid of a walker. She was discharged on fourth postoperative day after she could independently move around in the in-patient department corridor and could use the toilet herself. The ability to bear weight immediately after surgery added to her confidence towards a quick recovery and the goals of treatment like early mobilisation and prevention of recumbency complications were achieved. Furthermore, constrained primary total knee arthroplasty in this case also made possible early discharge of the patient from the hospital in this pandemic situation resulting in a happy patient and a satisfied surgeon.

When it comes to avoiding the spread of coronavirus, health authorities world over recommend using a hand sanitizer that includes at least 60% alcohol if soap and water are not readily available. Alcohol is, after all, the main element in hand sanitizer. The majority of hand sanitizers contain 60 to 95 percent isopropyl or ethyl alcohol mixed with water and gels. However, while alcohol has been used as an antiseptic since at least the late 1800s, the origins of hand sanitizer remain unknown.

According to one version of the story, Lupe Hernandez, a nursing student in Bakersfield, California in 1966, invented hand sanitizer by combining alcohol and gel for use by doctors in instances where they don’t have time to use soap and warm water before performing surgery.

There’s also Sterillium, which, according to the German firm Hartmann, was “the world’s first marketed alcohol-based hand disinfection” when it first hit European markets in 1965. It’s made of glycerin and 75% alcohol.

Others credit Goldie and Jerry Lippman, a married couple who created a waterless hand cleaner in 1946 for rubber factory workers who had previously used harsh chemicals such as kerosene and benzene to remove graphite and carbon black from their hands at the conclusion of their shifts. The product, dubbed Gojo (a portmanteau of their names), is a mixture of petroleum jelly, mineral oil, and less than 5% alcohol that is still used by auto mechanics to clean off grease and oil. The Lippmans made their initial batches of Gojo in a washing machine in the basement of Goldie’s parents’ home in Akron, Ohio, where the couple was living at the time. They sold the final product out of the trunk of their automobile in pickle jars.

Gojo continued to offer their products as industrial cleansers for decades after that. The company then developed the Purell hand gel in 1988, which has 70% ethyl alcohol and propylene glycol as its major ingredients. While Purell is currently the world’s best-selling hand sanitizer, it took some time for stores to stock the product that most ordinary customers weren’t asking for.

In the same year, Vi-Jon Industries followed Gojo’s lead and introduced GermX, which is now one of the best-selling hand sanitizers.

Despite the introduction of Purell and GermX to the consumer market in the late 1990s, sales of hand sanitizers did not take off until the 2000s. To begin with, it wasn’t until 2002 that the CDC changed its hand hygiene guidelines to endorse alcohol-based hand sanitizer as a viable alternative to soap and warm water for both health care workers and the general public.

Throughout the 2000s, hospitals around the world started the widespread practice of placing hand sanitizer pumps throughout medical facilities.

In 2009, the World Health Organization followed suit, with new WHO guidelines promoting the use of alcohol-based hand sanitizer among health care professionals, particularly those in resource-poor countries with limited access to
clean water.

In the aftermath of the H1N1 swine flu, consumer sales of hand sanitizer skyrocketed. Combination of consumers’ fears of contracting H1N1 and health experts increasingly recommending alcohol-based hand sanitizers as an option to fight the spread of germs in recent years likely contributed to the first significant spike in hand sanitizer sales, which increased by 70% during that period in the United States.

Amidst the COVID pandemic, hand sanitizers have now become a household item. The global market for hand sanitizer products is poised to reach $2.1 billion by 2027 given the long-term consequences of the
coronavirus epidemic.

No Tobacco day - 31st May 2021 was marked by the WHO giving a call of “Commit to Quit”. Dr Prashant Mathur, Director, ICMR-NCDIR delivered an update on Tobacco related cancers on that day. Here are some excerpts.

Indian Council of Medical Research (ICMR) and National Centre for Disease Informatics & Research (NCDIR), recorded 13.9 lakhs new cancer cases in 2020 in the country. The estimate is that the incidence is likely to increase to 15.7 lakhs by 2025, based on current trends. According to the WHO, India accounts for over 6% of cancer related deaths. By end of the decade, cancer mortality in India is projected to increase to over 900,000, with tobacco-related cancer accounting for a major share. Tobacco related death in India has increased to 13% in 2019 as compared to 10% in 1990. Area of major concern is the increased tobacco consumption in younger age group and non-tobacco smoking women. 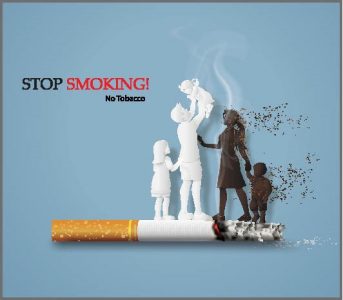 Global Adult Tobacco Surveillance (GATS) in 2009-10 was conducted to generate evidence for driving policies and programmes on tobacco control in India. In 2021, as per the National Non-communicable Disease Monitoring Survey (NNMS) 32.8% of adults between 18-69 years used either smoked or smokeless forms of tobacco. 12.6% of adults smoke and twice this proportion takes smokeless tobacco (24.7%). North-eastern states of India have reported more than 40% use of tobacco, highest being in Tripura (64.5%). Use of smokeless tobacco is higher than smoking in most of the states and union territories as per GATS report.

43% of pregnant women (during the survey period) partook tobacco in Mizoram. This was higher than the national prevalence of 7.5%. The average age of initiation of tobacco was observed to be 21 years. Persons with age of

65 years and above account for ~41% of total tobacco users. The prevalence of tobacco use increased over every ten years of age, from 12% between 15-24 years age group to 30 % in the 25-44 years age group. Three in five adults aged 18-69 years smoke bidis and one in five smoke cigarettes. Khaini (11.2%) and gutka (6.8%) are the two most commonly used smokeless tobacco products.

Way Forward
Awareness drives, teaching and cancer control programme have resulted in a substantial reduction (<30%) in tobacco use in our country over the last decade. It is projected to further reduce from 25% in 2020 to 22.3% by 2025 with continuing efforts and mounting a multi-pronged attack on tobacco use.

Measures suggested to overcome the burden of tobacco related cancers are:
•   Promotion of Information, Education and Communication (IEC) for prevention and quitting use 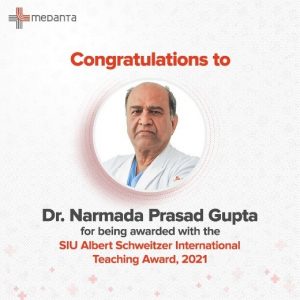 Recognizing important contributions to the teaching of urology, particularly in the developing world,
Dr. Narmada Prasad Gupta, Professor Emeritus, Urology and Andrology, Medanta Kidney and Urology Institute was felicitated with the prestigious SIU-Albert Schweitzer International Teaching Award by Socie’te’ International D’Urologie, an International urological association of 4000 members.  Dr Gupta pioneered robotic surgery in Urology in 2006 at AIIMS and has performed the largest number of robotic surgeries in India in his specialty. He was the President of Urological Society of India (2007) and Asia (2008-10), and National Delegate and Board Member of Socie’te Internationale D’ Urologie (2004-06). He has been conferred upon several awards by various urological associations and notably Padamshree by the Government of India in 2007 and Dr. B. C. Roy National Award in 2005.

As part of #VaccinesForAll initiative, Medanta, in partnership with the Government of Haryana and IAmGurgaon,a non-governmental organization, is administering free COVID vaccines to the underprivileged in Gurugram. Through vaccination camps in in Sikanderpur, Nathupur, Kadarpur and Islampur, free vaccines are being administered to people whose livelihoods depends on earning a daily wage.

Scaling up vaccination is the most effective way
to combat COVID-19. Nearly 70% of the population in India needs to get vaccinated for us to achieve herd immunity, and this needs to happen at a fast pace. We at Medanta are channelizing our efforts towards the realization of this goal by partnering the Government of Haryana and Iamgugaon to administer free vaccination to the economically vulnerable.