Once Again, Medanta Ranks as the Best Private

Testimony to the world-class healthcare it provides, Medanta has been acknowledged as the best private healthcare provider in India for the second consecutive time in the World’s Best Hospitals 2021 survey by Newsweek in partnership with Statista Inc.

Conducted across hospitals in 25 countries, the survey is based on recommendations from medical professionals, results from patient surveys and key medical performance indicators.

It is indeed an honour for Medanta to be voted as the best private hospital in the country for the second consecutive time by a body of medical professionals and patients. Since this survey has been conducted independently, it highlights the reputation Medanta has built over the years. We stay committed to providing patients with the best standards of clinical care, medial infrastructure and advanced technology. We will continue to focus on delivering holistic and affordable healthcare based on excellence, compassion, collaboration, learning and innovation.

India’s first multicentre randomized controlled trial on the use of Tocilizumab in COVID (COVINTOC – Covid – India – Tocilizumab) has demonstrated that anti-inflammatory treatment, Tocilizumab (TCZ), reduces the risk of death among patients with severe COVID-19. The results of the trial have been published in the journal - The Lancet Respiratory Medicine.

This is the first Phase 3 study to demonstrate that while routine use of TCZ on all hospitalized COVID patients was not warranted, TCZ improved survival among patients with severe COVID-19, explained Dr Arvinder Soin, the National Lead investigator and Chairman of the Medanta Liver Institute. The study was conducted from May to October 2020.

Eleven well known public and private tertiary care hospitals from ten Indian cities participated in the study. A total of 180 patients were recruited, 90 of whom received TCZ and standard care, whereas the other 90 received only standard care. Steroids and Remdesivir once allowed by the Ministry of Health and Family welfare, were administered to patients in both arms. While there was no difference in mortality and need for ventilation among the two groups of patients when moderate and severe categories of patients were considered together, a subgroup analysis of the severe patients in the two groups showed a lower mortality (8/50; 16%) among those who received TCZ compared to those who did not (14/41; 34%) at 28 days. TCZ was shown to be safe as the reported adverse events did not differ between the TCZ and standard care arms.

Elaborating on the use of TCZ, Dr Soin said, “Given the conflicting results of the previous studies, millions were wasted last year on indiscriminate use of TCZ, since the exact stage of the disease in which to use the drug was not clear. COVID is not going away any time soon. So this study plugs an important gap in knowledge on COVID treatment and gives a clear direction on the timing of TCZ in COVID treatment. Incidentally, in February 2021, two major studies - the RECOVERY Trial from UK and the REMAP-CAP study – have revealed similar findings, that TCZ reduces mortality among patients with severe COVID. Prompted by these findings, the NHS in the UK has now included TCZ as part of their standard treatment protocol of patients with severe COVID.” 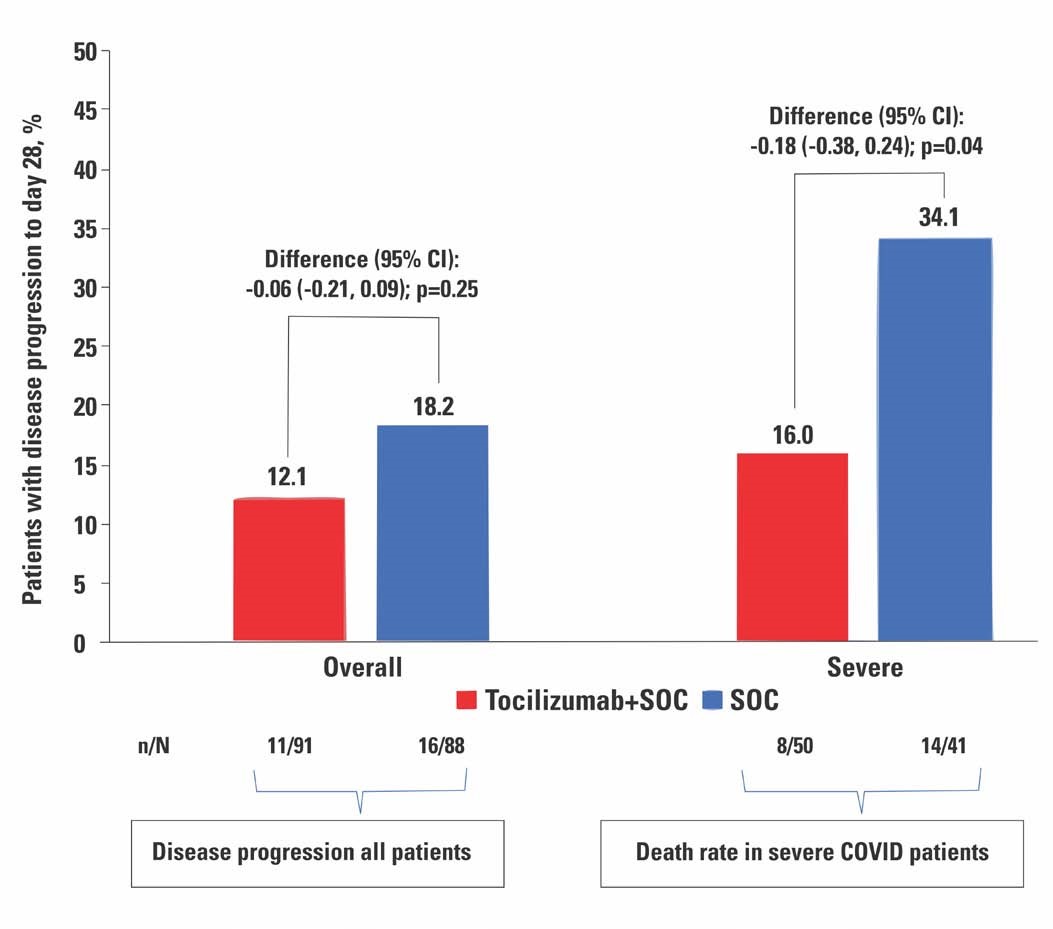 In their paper, the COVINTOC team of investigators, have also brought out the difficulties encountered in conducting trials during the pandemic. They were impeded by challenges such as changing standard care, administration of off-label treatments, rapidly evolving understanding of pathogenesis and treatment, multiple trials competing for participants, media attention, and the publication of non–peer reviewed reports. Additional barriers included low research fund allocation, deficiencies in drug availability, logistical challenges, travel restrictions, reluctance or inability of patients who have recovered from COVID-19 to travel back to sites for follow-up visits, and shortages in research staff because the risk for contracting SARS-CoV-2 is high, and personnel are deployed for active clinical care in already over-stretched systems.

Congratulating the multi-institutional Indian research team, Dr Naresh Trehan, Managing Trustee of the Medanta Institute of Education and Research, and Chairman & Managing Director, Medanta, said, “This research is instrumental in giving the medical fraternity clarity on when to use TCZ in COVID. Becoming the first ones to provide published evidence of this to the world, we have demonstrated that, even during a pandemic, it is possible to conduct a randomised controlled trial despite the multiple challenges and constraints encountered”. 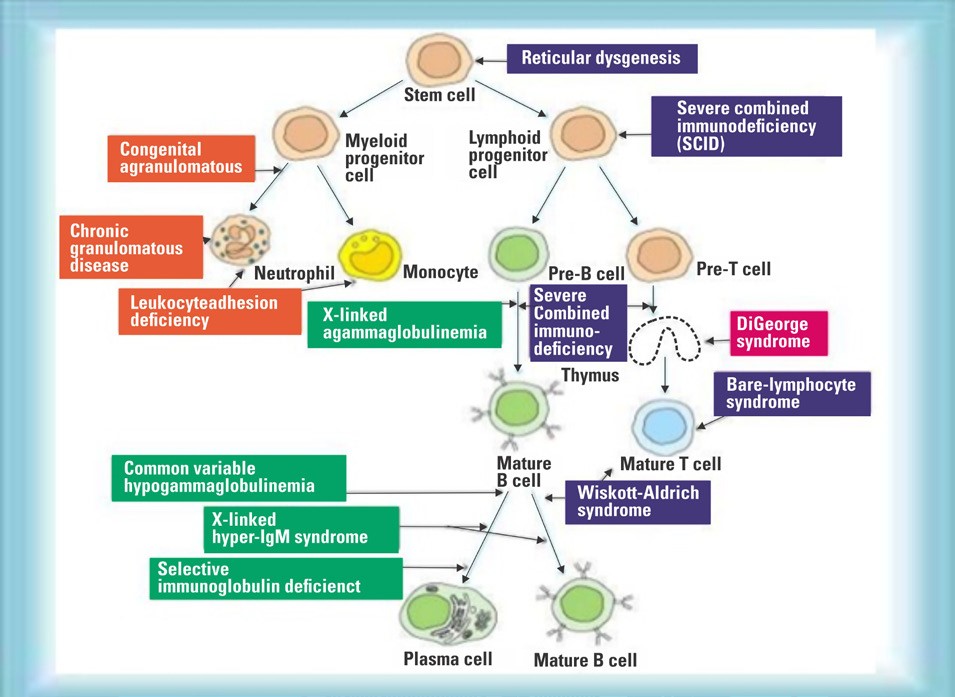 Bone marrow transplant (BMT) is a curative option for children with severe combined immune deficiency or T cell disorders.  Previously, only one case of BMT for CARMIL2 deficiency has been reported. We describe here a successful allogeneic BMT for the same in a one-year-old boy.

Case PresentationThe child was born out of consanguineous marriage and presented with recurrent chest infections, diarrhoea, eczematous dermatitis and diagnosed to have cytomegalovirus (CMV) pneumonia at the age of 11-months and was treated with Ganciclovir but CMV infection persisted despite appropriate antiviral therapy. He had failure to thrive. He was suspected to have a primary immune deficiency disorder possibility affecting T cells.

Arriving at DiagnosisIdentifying a specific genetic cause of PID can facilitate definitive treatment including haematopoietic stem cell transplantation, genetic counselling, and the possibility of gene-specific therapy. Unfortunately, only 29% of patients with PID have a genetic cause of the disease, with the lowest rate in those who have no apparent family history. While variants in over 300 genes have been described as monogenic causes of PID, it is often difficult to match the clinical phenotype to a known genetic cause, because phenotypes are heterogeneous and disease penetrance is often low. We therefore ordered Whole Exome Sequencing (WES) to diagnose this suspected case of PID.

The child had persistent CMV infection and PID. Only curative therapy for this PID is allogeneic BMT. He had no siblings. So we performed human leukocyte antigen (HLA) typing to find a donor for BMT. Fortunately his father was a fully matched (10/10) donor on HLA typing. He was asymptomatic and healthy. He was selected as a bone marrow donor for his son.

Child was continued on intravenous Ganciclovir and given additional weekly intravenous immunoglobulin infusions. His CMV DNA pre-transplant was 180 copies. He underwent matched related donor BMT from his father as the donor. He was conditioned (prepared) with reduced toxicity regimen consisting of Inj Rituximab, Fludarabine, Busulfan, and anti-thymoglobulin. Bone marrow stem cell CD34+ 20 million/kg were collected from father and infused into the child the same day. Inj Ganciclovir was continued till Day-2 and then shifted to oral Valacyclovir. Cyclosporine and Methotrexate were used for Graft vs. Host disease (GVHD) prophylaxis. Post-transplant Voriconazo-le was given to prevent fungal infection. Post-transplant period was uneventful. Platelet engrafted on Day+12 and neutrophil engrafted on Day+18. Ganciclovir was restarted from Day+17. IVIG infusions were given on Day+11 and +18. CMV titre on day+22 was 180 copies but became negative on Day+47 and remained negative thereafter. Child had mixed but gradually improving chimerism on Day+21- 63.5%, Day+78- 80.82% and Day+90- 86.32% donor cells. At present, child is Day+270 post his BMT and is doing fine with no evidence of GVHD or infection or eczema.

CARMIL2 deficiency, a rare PID, can be treated with allogeneic BMT. Children with suspected primary immune deficiency should be referred to a Pediatric Hematology Centre with experience in doing BMT for PID at the earliest to have best outcomes. 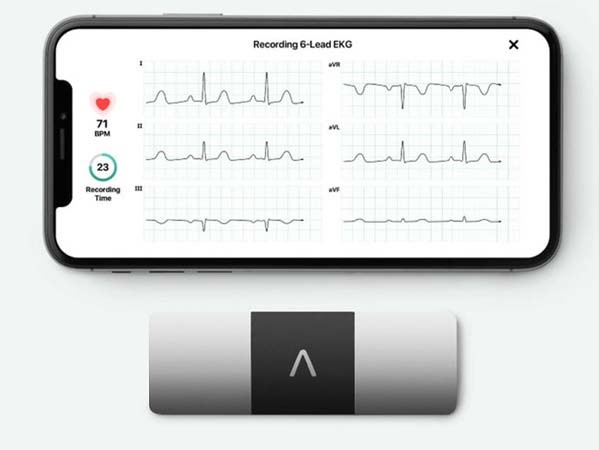 Committed to constantly furthering best possible patient-centric treatments and solutions, Medanta has partnered with AliveCor to introduce a device that allows cardiac patients to record medical grade ECG anytime, anywhere. The world’s only US-FDA cleared 6-lead personal ECG device, it can record the ECG in just about 30 seconds and share it with a cardiologist at Medanta for real time monitoring. With no mess of gels and wires, this is the easiest way to record ECG and self-monitor one’s heart health.

The personal ECG device pairs with any Android phone or iPhone and can identify atrial fibrillation, bradycardia, and tachycardia. The algorithm in the device can instantly detect if there’s any serious condition that needs medical intervention.

The device is easy to use. One needs to download a companion app called Kardia and pair the device to their phone via Bluetooth. A CR2016 battery powers it. There are no on/off buttons. The device starts when the patients touch the electrodes.

Dr Susovan Banerjee, Senior Consultant, Division of Radiation Oncology has received the “GAPIO Excellence in Radiology/Radiation Therapy Award” for his innovative contribution in Gynaecology Brachytherapy treatment. He has been instrumental in developing the indigenous Medanta AOLO template for treatment of advanced cervical cancer by brachytherapy within a reasonable cost.

Global Association of Physicians of Indian Origin (GAPIO) is a non-profit organization established in 2011 with the aim of bringing over 1.4 million physicians of Indian origin in the world on one professional platform. It has presence in 50 countries. In order to recognize excellence in various healthcare services by Indian doctors, GAPIO announces awards in various categories. 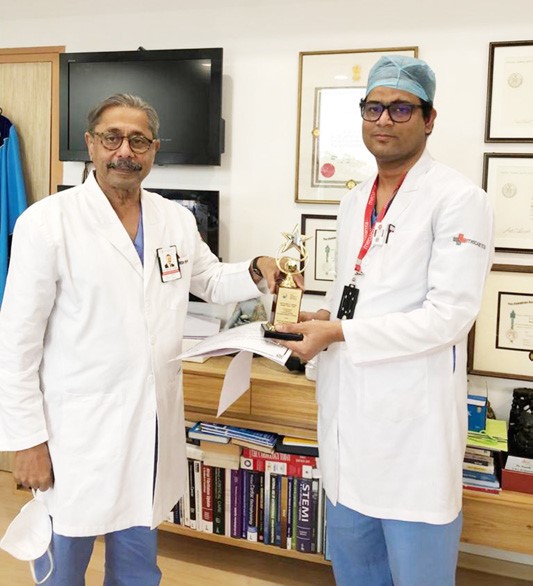